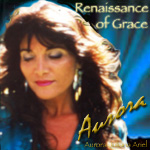 On the island of Maui, songs began flowing forth in a beautiful language that I’ve come to believe is a Universal Expression of Love. Night and day they flowed forth, each with a unique melody. I could sing for hours and then when I would stop, the songs would continue on in my mind sometimes waking me at night.

It all began in 1997 around Valentine’s Day on a visit with renowned multi-instrumentalist, Bruce BecVar, who is soul family to this day. Without warning, our hearts opened to Love, transporting us into that rare and much sought after Beloved Relationship. In that moment, we entered a transcendent world of beauty, light and color. It was a Renaissance of Grace that continued day after day without end. Two months later, we performed at a Healing Conference on the island of Crete. On the Island of Santorini days later, a comet graced the night sky ‘Under a Shiva (new) Moon.’ Bruce began playing his guitar. Immediately my heart leapt. Somehow I knew this song! I began singing and Bruce joined me. Love’s Eternal Flame was the first song that came through both of us, launching an inspired creative synergy over the next years with performances in Hawaii, Colorado, and Sedona.

Shanti Aloha, a beautiful villa on Maui became our home and we began recording the songs in our music studio there. A beautiful collection of songs had come through me, though at times, it was Bruce who would receive an inspired melody and lay down guitar tracks. I would come in and the vocals would pour forth. Many of the songs came in this way. Instead of us composing, then recording, they were coming in as we recorded. Amazed, Bruce said, “The songs are coming in with same exact syllables in each track. This is definitely a language!”

My every session in the studio was a spectacular experience. There was always a very special presence. One time as I sang the walls disappeared and I became a vast Feminine Presence cradling the world in her arms with so much love and compassion for every soul. Each time I recorded Love’s Sacred Fire, I was transported to an altar in a huge celestial cathedral. It felt like I was singing a prayer for humanity and the world. The Divine Ones say these songs have a healing presence, inspiring universal principles and New Archetypes. A gift from the Heavens… they are a Sacred offering to Humanity at this significant time.

My first album with these songs was Renaissance of Grace. Since then, they have been woven into the 12 Healing Music for an Awakening World CDs with Bruce BecVar’s and Krystofer Gabriel’s songs. Many people like to keep them playing in their homes and businesses, to stay in that uplifted state with healing flowing continually. However you use them, know they are a gift from the Divine Ones for your healing and Soul Advancement at this time.