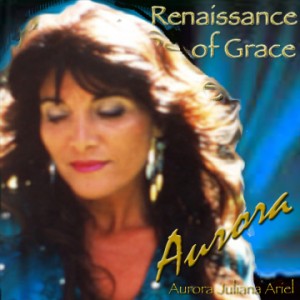 Renaissance of Grace
by Aurora Juliana Ariel with Bruce BecVar

"Aurora Juliana Ariel is one of those rare artists whose clear voice and beautiful music transmit to more than just the ear, but reaches into the listener‘s heart with hidden healing messages. Coupled with the extraordinary talent of musician/composer Bruce BecVar, Aurora‘s offering awakens our inner peace and invites our own calm center to bubble up to the surface." -Pamela Polland, Award Winning Recording Artist, Vocal Coach

This is Nuevo Flamenco music AT its finest. Fast paced songs drop down into haunting melodies in an exotic blend of gypsy guitar (Bruce

"This album is a therapeutic blend of New Age musical sound graced by the angelic voice of Ariel who is not without her match in BecVar. Ariel and BecVar put together a musical experience worth cherishing. The album’s music is relaxingly invigorating and will stimulate you with its deep thought and meaning. An inspiring, earnest and spiritual journey is what you’re about to embark on. Think Strunz and Farah on a spiritual path." -Manny Auguste of Bryan Farrish Radio Promotion

A magical weave of guitar, instrumentals, and exotic vocals, this album has been highly acclaimed for the SPECTACULAR LOVE and TRANSCENDENT JOY that fills every note, carrying you into a world of romance, beauty and light.

This music uplifts and inspires, enchants and awakens… And keeps you coming back for more!

"Journey of the Heart and Shiva Moon are two of the most heartfelt ballads you will hear on any release, their voices soaring together and weaving in and out of ﬂuid guitar lines, gentle piano, bass, ﬂute, and percussion. The lyrical romanticism that is expressed owes much to the spirit of Aurora Juliana Ariel, who collaborates with Bruce BecVar to create inspired songs …" ~ DL, New Age Voice

Rivers of Life, Music of the Angels
by Krystofer Gabriel

Krystofer has a rare talent… he receives his inspiration from angelic realms. Grown men have weeped, women have successfully made it through rehab, others have felt healed, uplifted, calmed, or inspired. Translated into deeply moving, rich melodies that take you to a place of peace and transcendence… this music is unforgettable.

#1 Bestselling Author, Creator of TheQuest, and award winning author of the Earth 2012 series, Aurora’s greatest love is creating healing inspired music, books, and films. CEO & Founder of AEOS, she is the author of 7 books, and has produced 16 music CDs (holding composing and vocal credits on 15), 7 Healing Power of Love audio CDs and has written 7 books, with many more exciting offerings to come.

Bruce BecVar is a legendary guitarist, renowned composer, and talented multi-instrumentalist with over 15 CD’s to his credit under his music production company, Shining Star. His music has graced compilation albums for Windham Hill, Narada, and now AEOS’s Healing Music for an Awakening World. His bestselling CD, The Magic of Healing Music was created for Deepak Chopra.

Krystofer’s extraordinary music heralds its inspiration from the angels. Grown men have wept listening to his unique melodies, which have inspired healing and life transformations in many listeners. His contributions in the Healing Music for an Awakening World collection come from his album, Rivers of Life, Music of the Album, produced by Aurora and Krystofer under AEOS.

100% of All Proceeds Supports our Global Healing Ministry